Populism is known as a political philosophy in which, in addition to conveying a message in a more simplistic way so that a larger population can grasp its meaning, it also focuses a lot on the struggle of the “people” against the elites who have oppressed them, like all philosophy, can have different realities and therefore, today we are going to analyze the nature of Populism, I invite you to read it to the end.

If we look at it from a philosophical point of view, nothing is really good or bad, because each individual has a different perspective of seeing things, it is something subjective that varies depending on many factors, such as the reasons, the situation, the objective, the way in which the action is said or carried out, who did or said it, among others? Populism is a philosophy that, depending on the way it is applied, can be negative or positive. Certainly, in my opinion, I love to see philosophy in a “neutral” way, to give two well-known examples, in the debate on whether human beings are good or bad, I consider us to be ambivalent beings. In the debate on whether the end justifies the means, I think it depends on the circumstances and whether or not there is a better alternative. And if, in this case too, I see it in a very’neutral’ way because I think that populism as a philosophy is perhaps not inherently bad.

Populism is, after all, a way of giving a message, which, while it uses certain modes’ that can be considered dirty’ in some way, such as creating a common enemy, which is pathetic and disgusting in my view, it is true that the majority of the population does not know about technisisms and does not want to know how’ things are done. To take one example, Trump is populist because he shared information about what he wanted to do in a populist way, he said “I’m going to build a wall”, he didn’t give technical data or any other information that a fairly large section of the population would think “I don’t care” or “I don’t understand it”. 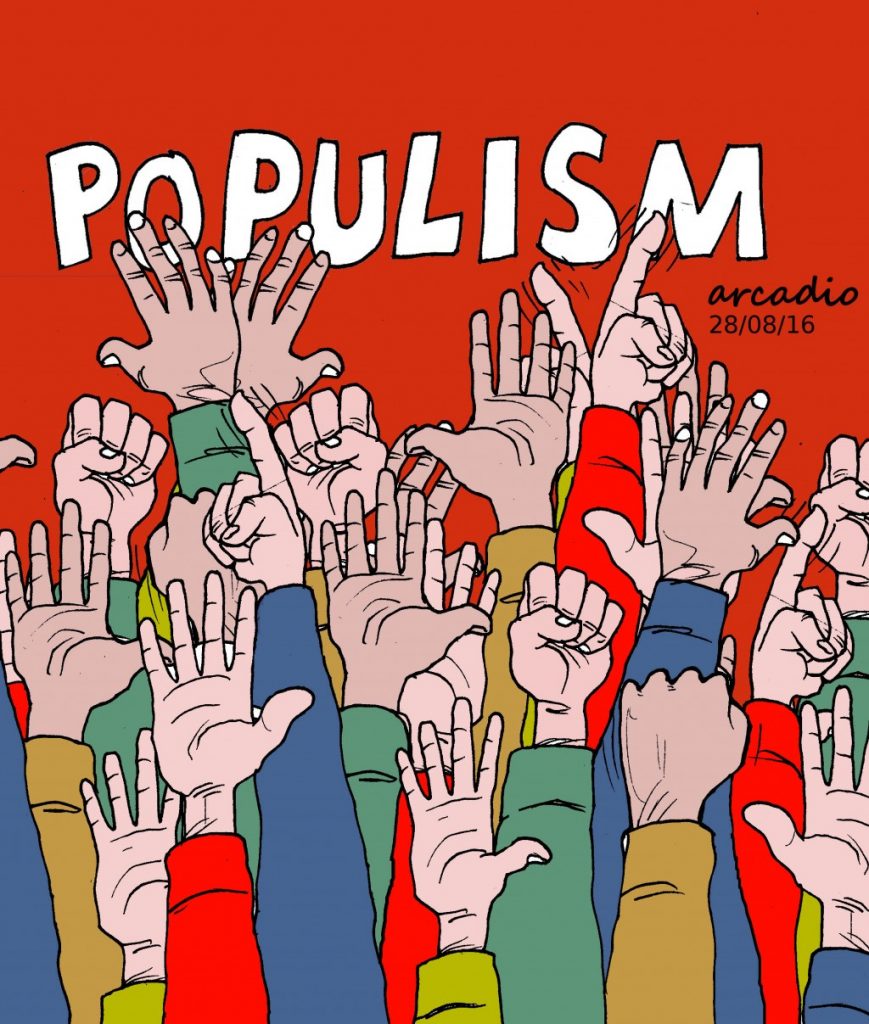 If you hadn’t used populist discourse you probably wouldn’t have won that election, again we can see the case of Donald Trump, who, in addition to using a “populist” discourse, had it in front of what I think is a terrible opponent, but why wouldn’t you have won, again, because most people don’t care about or understand technicalities, unfortunately, many just want to hear what you’re going to do, not how you’re going to do it.

The big problem with populism is the use of this physiology for negative ends, such as lying, sowing hatred, seeking more power to be the “messiah” of your nation, populism is used much more negatively than positively. Gloria Álvarez and Axel Kaiser, two Libertarians born in Nicaragua and Chile respectively, talk a lot about this in their book “El Engaño Populista” where they talk and explain how populism has been used in Latin America in order to create a division between social classes, totalitarian governments, lies, among other things. And it is true that many politicians use populism as a way of deceiving and manipulating people, leaving aside all logic and reason and then coming to power and continuing to lie, increasing their powers and therefore corruption. In this case, populism is very bad, because you deceive people, in this case you knew you wouldn’t do or couldn’t do the things you promised.

That is, depending on your point of view, populism can be good if you promise and keep your promises. It’s bad, if you use it to lie, gain a lot of power, generate hatred and corruption… But if we had a society that was intelligent, critical thinking and had no desire to depend on a government to live its life, would it be necessary or would there even be Populism, let us bear in mind that populism is a simplistic way of saying things, it appeals to people’s feelings and even ignorance and ignorance. Information is power, education is also power, therefore, with education there could not be populists because everyone would understand a more elaborate message.

In this case, we have populism as an enemy of education and as an ally of disinformation, although it is true that it continues to be a way of compacting information and making it available in a quick and understandable way to everyone, it is also true that since it is compacted information, it will always leave out very important information, for example, “I am going to create jobs”, How will you do it? it’s very important to know, because depending on how you do it can generate a problem or not, it can be positive or not in the long run. This is another problem. The lack of information and the previous assumption that you are stupid enough not to understand an important message completely, or the previous assumption that you “don’t want to know”.

In conclusion, philosophically as everything else, populism is neither good nor bad, it is merely subjective. Personally, I believe that populism appeals to ignorance and sentimentality even though it can be used for “good”, but using it for good is not the general rule, for unfortunately Populism has been used much more and will continue to be used to manipulate and deceive people in order to gain a political place and continue to plunge nations into misery, As a lover of information and truth and as an ally of Education, I believe that populism must disappear, only with education and information can people be able to be independent and make good decisions and populism is most often used for the opposite, in addition to sowing hatred towards an “elite” or “empire”. Thanks for reading, peace.